In February 2020, the 4AK travelled to Dublin/Bray with their teachers Prof. Hetfleisch and Prof. Wagner. The plan was to experience Irish culture first-hand by living with host families, visiting historic sights and breath-taking landscapes and studying at a language school in Bray. Over the course of eight days, we had a guided tour of Dublin, visited St. Patrick´s Cathedral, Jeanie Johnston Tall Ship, the Guinness Storehouse and the Wicklow Historical Gaol, went on a 12 km cliff walk and discovered Glendalough and the remains of its monastery that was founded by St. Kevin in the 6th century.

What do our students have to say about our trip?

Our Journey to Bray and our first Day there:

It was the 16th of February when we all met at the airport at 9:00 AM to start our upcoming journey to Ireland. Everyone was excited to get on the plane. The teachers decided to make our trip more interesting and thus started a quiz that went on throughout the whole week. We arrived in Dublin at approximately 2:30 PM, but we still had an hour of journey to Bray. Upon arriving in Bray we got off the bus to meet our host families at ATC language school, which had organized the arrangements, e.g. accommodation, lessons and program. Most of us had decided to stay at our host families in pairs. I, for example, was paired with my friend Clara, and we stayed with the Drew family. They are lovely people and a reason why this experience in Ireland will always be unforgettable for me. (Alyssa)

On Monday we had a tour of Dublin, where our guide showed us the city centre. We saw the Parliament and other historically important buildings and also visited St. Stephen´s Green. It was a beautiful park with a lake and a lot of animals. We also saw Trinity College of Dublin which was really beautiful. (Emilio)

We visited a lot of sights in Ireland. I liked the sightseeing tour of Dublin and the prison we visited on our last day the most. Dublin is a very beautiful city. (Sarah)

We went to Dublin on Monday. We saw the Spire, which is pretty much in the middle of the city. Furthermore, we crossed the Liffey, the river that flows through Dublin. We also saw Trinity College, the Parliament and many other sights. It was very important for us to take lots of photos of our trip. I really enjoyed the trip to Dublin. (Adam)

On Tuesday we met at 8.30 in front of the DART train station in Bray to go to Dublin. After we arrived there, we first went to St. Patrick´s Park, which is beside St. Patrick´s Cathedral. The weather was better than on other days because the wind wasn´t very strong and it was sunny. The cathedral was very interesting and I found out that it was built in neo-Gothic style. St. Patrick´s Cathedral is the tallest church in Ireland and was founded in 1191. The outside of the cathedral is currently being renovated, therefore we only saw parts of it. The inside of the cathedral is breath-taking and certainly worth a visit. It was cold inside, but I saw and got to know a lot, for example the sanctuary, the beautiful colourful windows, sculptures and the names, flags and coat of arms of the Knights of St. Patrick. (Clara)

On Tuesday we visited St. Patrick´s Cathedral which was built around 800 years ago, which was a time of great change in Ireland. A new wave of settlers, called the Anglo-Normans, established themselves as the new ruling elite. They were excellent engravers and developed St. Patrick´s Church into an impressive Gothic-style cathedral. Built with a mixture of local limestone and stone imported from Bristol, the basic fabric of the building remains much the same today. With that being said I think that St. Patrick´s Cathedral is really breath-taking. (Erik)

The original Jeanie Johnston was a tall ship that was docked in Ireland during the Irish famine. Nowadays, an exact replica of the Jeanie Johnston can be visited on the river Liffey in Dublin. We had a guided tour around the ship. The lower deck was filled with replica bunk beds and realistic, life-size figures. I found the visit interesting because it was the only ship that didn´t have any dead passengers during the famine. The Jeanie Johnston is definitely worth a visit when in Dublin if you want to learn about the history of Ireland. (Justine)

On Thursday we visited the Guinness Storehouse in Dublin. Guinness is an Irish beer which is known all over the world. There is a museum where you can see the production process of Guinness beer, but also learn about the history and marketing campaigns of the company. The Guinness company was founded in 1759 by Arthur Guinness in Dublin. The visit was very cool and interesting. (Victoria)

On the 21st of February we went on a cliff walk. The weather was perfect for this activity, as it was neither too sunny nor too cold, and because we were walking, we quickly got warm. The only problem was that it was pretty windy and some paths were still muddy from the rain the day before. Nonetheless, the paths were all easy to walk on. At the end of the path we reached Greystones, a beautiful little town with an amazing view of the beach. As we had walked there and back, we couldn´t stay all too long. I was a little sad that we couldn´t stay any longer, but we had to leave because otherwise we wouldn´t have been on time for dinner with our host families. It took us 1,5 hours to get to Greystones from our language school, so we were pretty fast. When we reached Greystones we saw the beach and the Atlantic Ocean. The water was freezing cold and the cold air didn´t make the situation any better. It seemed to me that we were faster on our walk home. In my opinion, it was the best activity because we were in the fresh air and because it was a great experience. In Vienna, you don´t have such an amazing view when you go hiking. On the way to Greystones, you could always see the ocean and the train tracks. (Ying)

The Glendalough Valley is located in the Wicklow National Park. It offers many attractions to visit, for example: the lakes, the Round Tower, the valleys and the famous Wicklow Way. We travelled there by coach. After we arrived we watched an introductory movie about the history of Glendalough and other monasteries. Then we went for a walk and saw a lot of different sights. The guide told us a lot of interesting facts throughout the day. I really enjoyed the trip even though it was extremely windy and cold. I would definitely recommend this trip to future students. (Chiara)

I liked Glendalough. It was pretty nice, except the weather, which was stormy. When walking around, I enjoyed the lush green landscape and rolling hills. There is an Upper and a Lower Lake. I personally had seen Glendalough before and wasn´t surprised. (Nick)

On Saturday afternoon we visited the Wicklow Historic Gaol. It is a historic prison and located in the town of Wicklow. It gained notoriety because of the brutality of the prison wardens and because of the imprisonment of people for crimes as petty as stealing some food. The prison was closed down in the 20th century. There are tales, however, that some of the spectral inmates never left. Paranormal activities were reported by visitors and staff. (Natalia)

On Saturday, the 22nd of February, we went to the historic prison of Wicklow. Rumours have it that the building is haunted. Many of the people who were imprisoned there in the past had only committed small crimes like begging. You can find wax figures of children, women and men in the cells. The guide told us that he saw ghosts in there himself. Overall, the Wicklow Historic Gaol was captivating. (Deyna)

Deyna and I stayed with the Dulton family, which was pretty cool. Unfortunately, the father had a heart attack two weeks before our arrival so we did not meet him. However, we met the three-weeks-old granddaughter Penny, who is incredibly beautiful. The room we slept in was pretty small and very cold during the night, but we somehow managed not to freeze to death. The food we got was okay. (Beatriz)

Our host family has five family members. They have three children aged between ten and 16 years and I got to talk to them a lot. We talked about their and my parents, my dog at home and about our homes in general. For breakfast we got cereals, for lunch we got a sandwich, chips, an apple or a banana and chocolate, and for dinner we got pasta or curry. (Anja)

What´s special about the Irish:

Irish people are extremely friendly and will help you if you have a problem. The Irish drive on the left side of the roads. It´s always cold in their houses because they only turn on their radiators at night. They cook with fewer spices than the people in Vienna do. (Tamara) 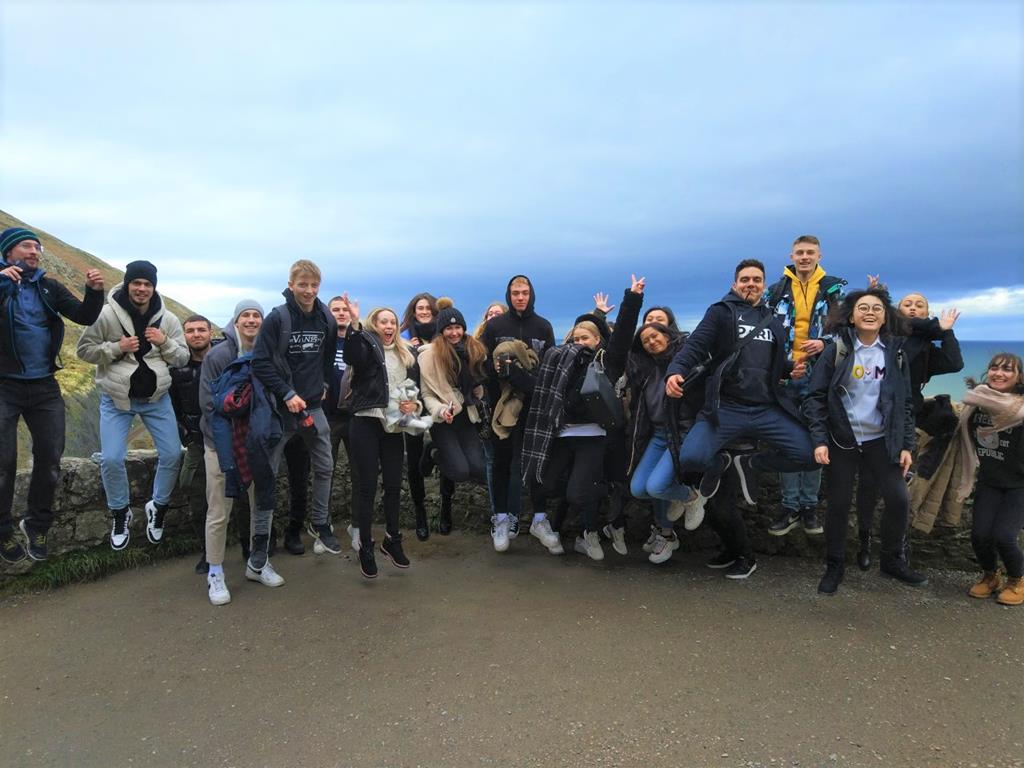 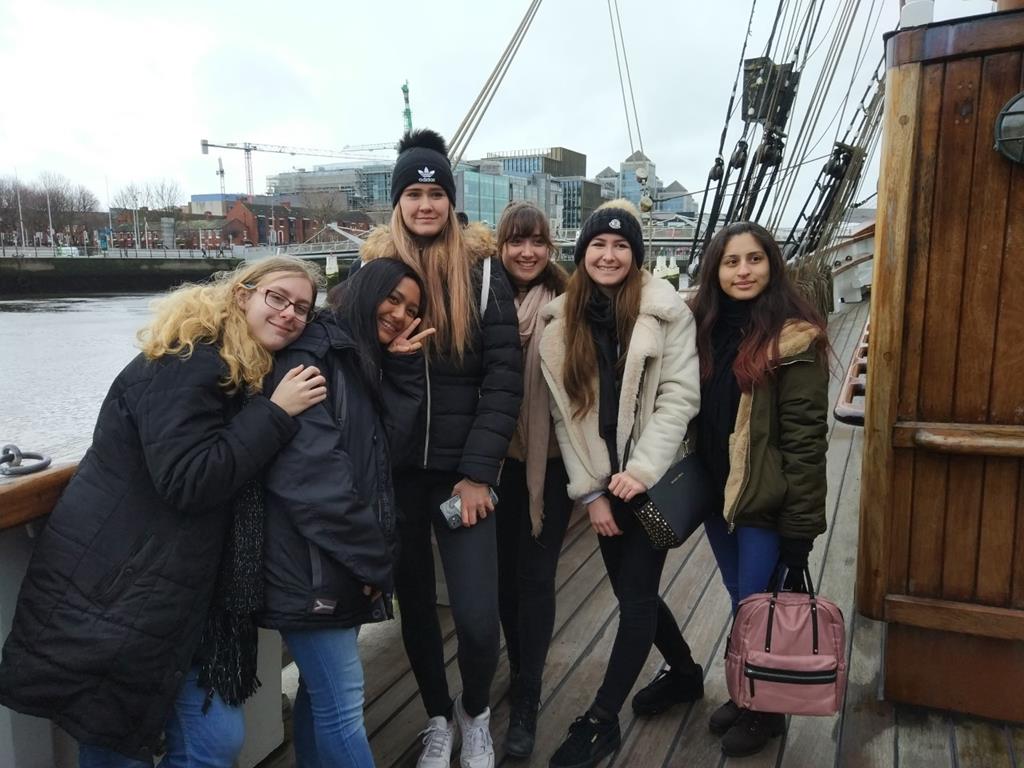 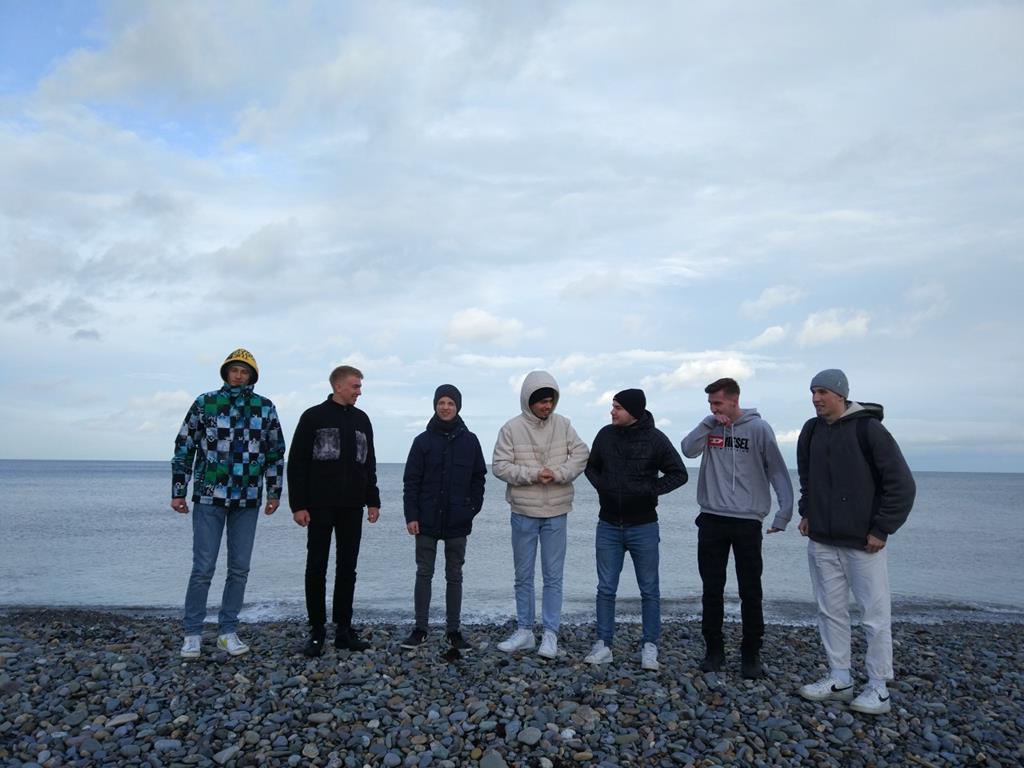 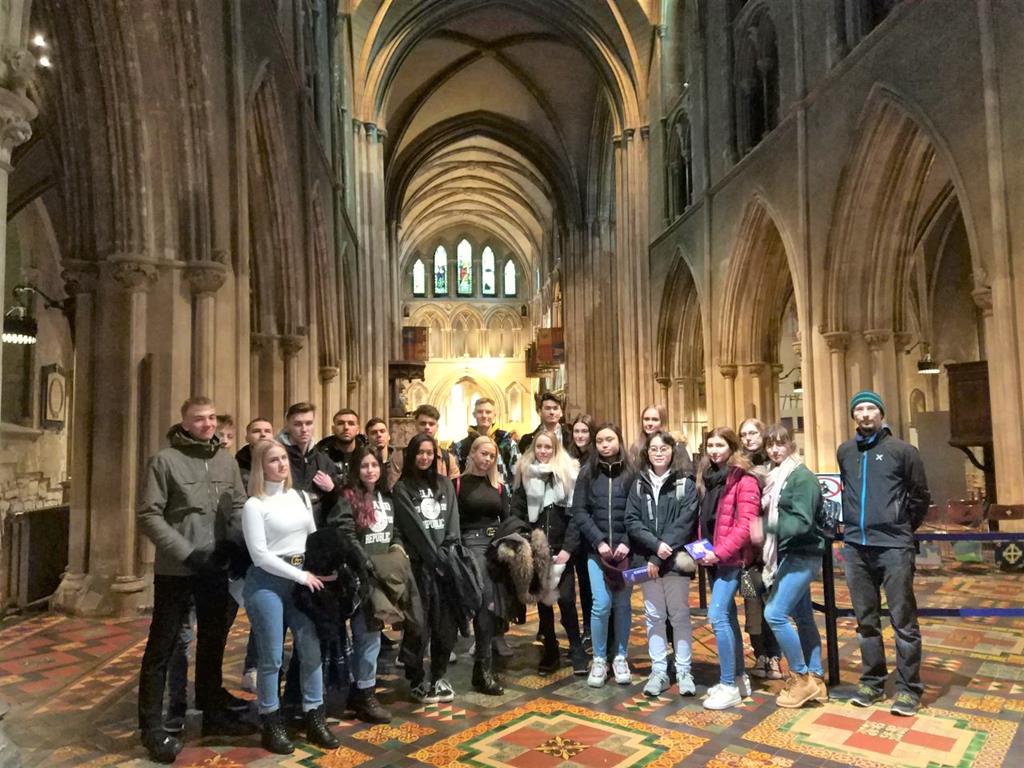 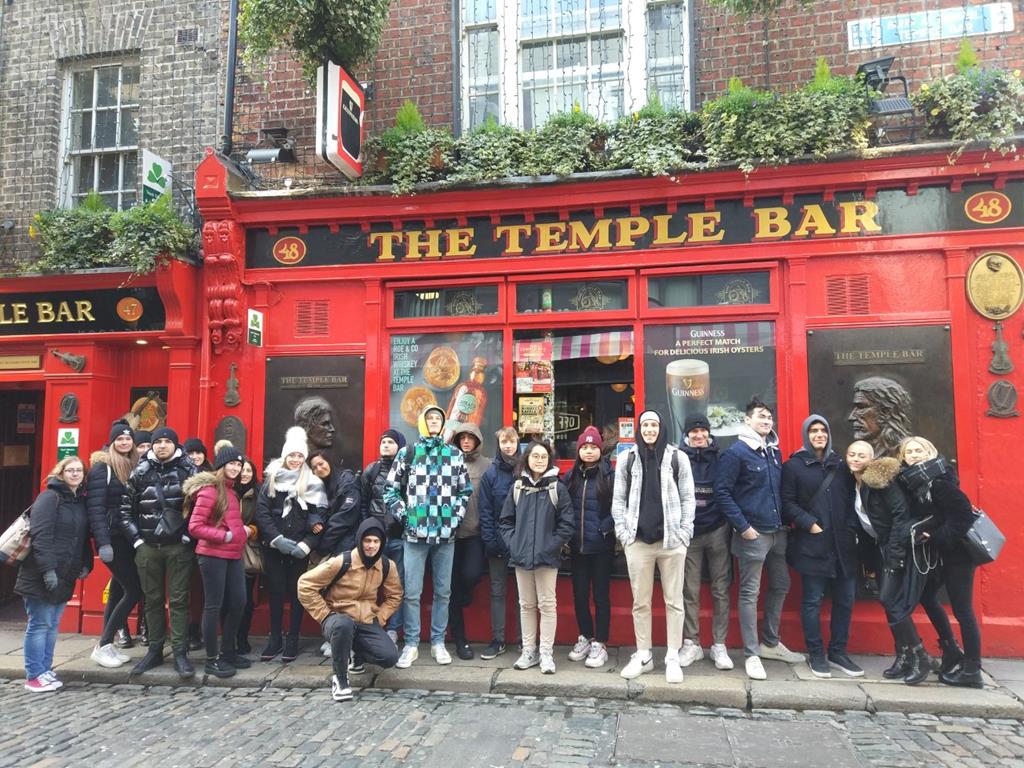 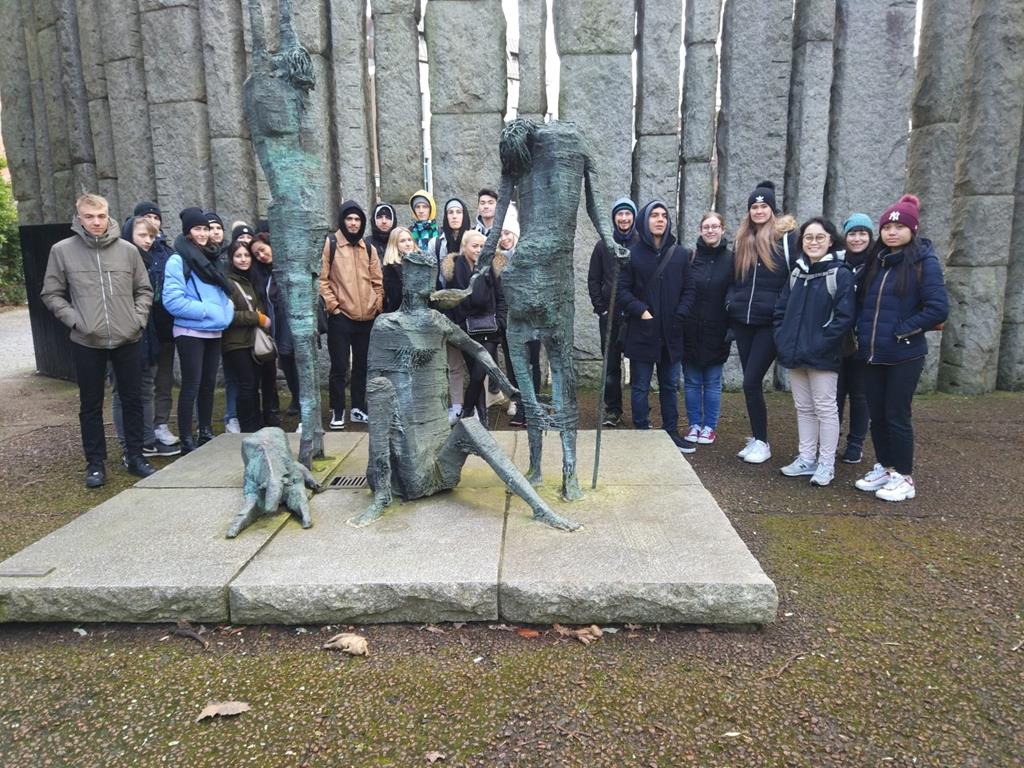 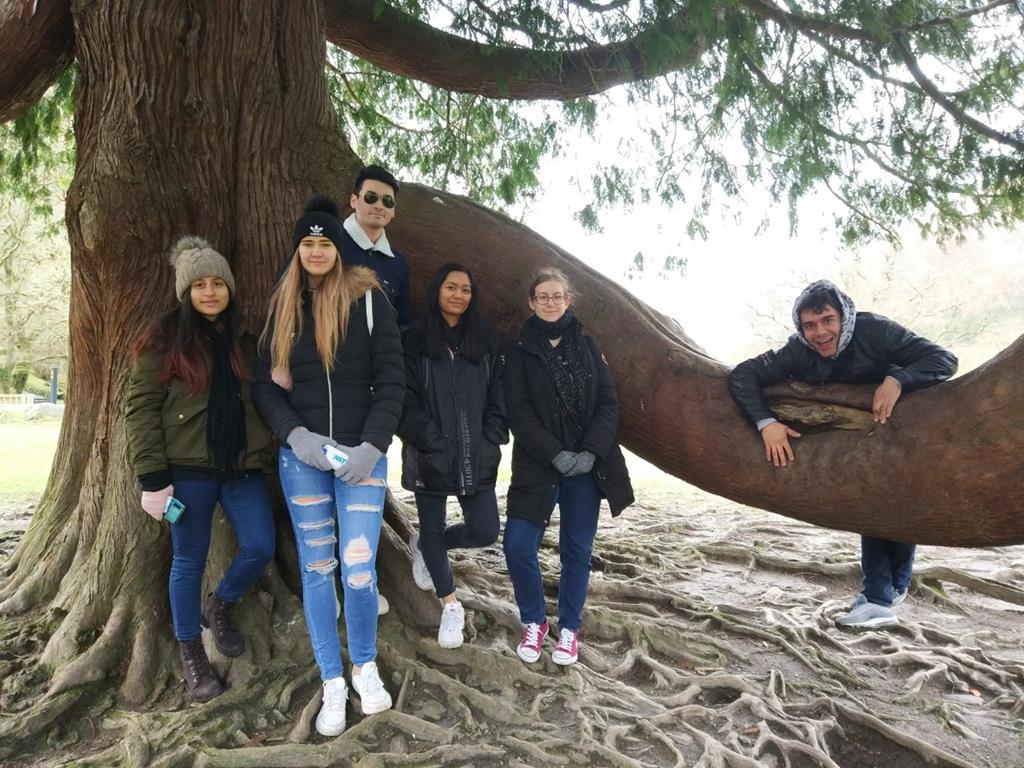